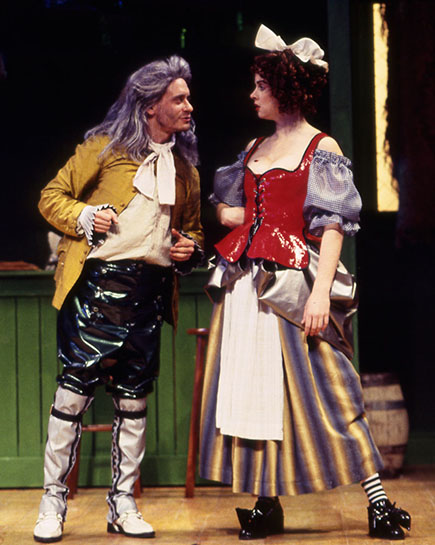 Aimwell and Archer are two fashionable beaux, on the lookout for an heiress to marry so they can repair their fortunes. To help their scheme, Archer poses as Aimwell's servant when they arrive in the city of Lichfield. Aimwell insinuates himself into friendship with the beautiful Dorinda, daughter of Lady Bountiful. Meanwhile, Archer strikes up an extremely worldly friendship with Kate, Dorinda's sister-in-law. She's unhappily married to Sullen, a parody of a country squire, mad for hunting and eating and (especially) drinking. Obstacles to a happy ending include the fact that Kate's husband despises her; that the innkeeper's saucy daughter, Cherry, has fallen in love with Archer; that Lady Bountiful, who is extremely over-protective of Dorinda's virtue, mistakenly believes herself to be a great healer of the sick, while a band of brigands plans to rob Lady Bountiful that very night.