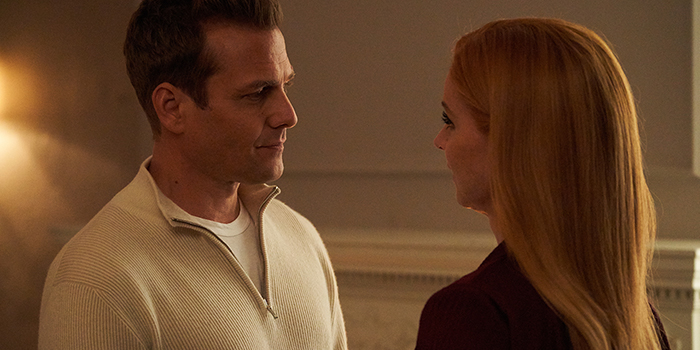 After eight seasons of will-they-won’t-they tension on Suits, power lawyer Harvey Specter and his longtime confidante, Donna Paulsen, are officially testing the waters when USA Network’s legal drama kicks off its ninth and final season on Wednesday. For stars Gabriel Macht and Sarah Rafferty, Harvey and Donna’s big romantic step forward was a long time coming — and rest assured, they’re ready to go all in. No second-guessing for the firm partners this time around.

“It was an eight-season build-up, so you certainly feel the pressure of that,” Rafferty, 46, told ET during a break on the Suits set in Toronto back in June. “The will-they-won’t-they is a dynamic in itself, so it was great to play that. But I think knowing that there were 10 [episodes] left, it’s much less scary to do it. For me, it’s just time to let them be happy and let’s just go out on that note.”

“The fans will be happy,” Macht said, conceding that the show “dragged out” the Harvey and Donna relationship for years. “We’ve all done, as an ensemble, a really good way of wanting the fans to just want a little more because that’s what you want. As soon as they get what they want, then they’re done. So, for the last season, I think it made sense.”

In the season eight finale, Harvey had a moment of clarity during a late night chat with fellow partner Samantha Wheeler at the law offices of Zane Specter Litt Wheeler Williams. It dawned on him, finally, that Donna was the person in his life who mattered most and with whom he wanted to share his life. Instead of sitting idly by, he appeared at Donna’s front door moments later and the new couple took a leap of faith by taking the next step in their relationship.

The new season picks up moments after their late-night hookup with the couple in bed. While Harvey and Donna will be going full force with their new romance, it won’t come without its ups and downs.

Macht echoed Rafferty’s sentiment, sharing that it was important for Harvey to reach a level of emotional maturity that had been absent for most of his life before he could go there romantically with Donna.

“He’s definitely growing up. He’s lost a few key people in his life. He doesn’t want to lose her,” the 47-year-old actor said. “He’s almost gotten over the whole abandonment issue of dealing with his mother. In the first few episodes of season nine, we’re going to really understand how, in some ways, he has become his mother and how he understands his mother. And that frees him up. That emotional awareness is something that Donna connected to and allowed him to enter her space and be with her and move forward in the relationship. I think it is time for them to explore that. I think they’re both ready to explore.”

As Rafferty explained it, Harvey and Donna have always been in each other’s orbits, whether it be as boss and employee or as friends on equal footing — and that a relationship for these two likely won’t fall under the traditional definition of the word.

“Some people have asked, ‘What’s it like to finally have them together?’ And I’m like, weren’t they always partners? Not technically, but they couldn’t function without each other. They always chose each other and that is a partnership,” she mused. “I love that we played for so many years that he fully acknowledged her status in his life. He may be the shiny sparkly closer in New York, but he even said very early on, ‘I can’t be me without you.'”

Macht was candid about how his perspective on the Darvey relationship has shifted and changed since Suits first debuted in 2011.

“In the beginning, I saw them as completely platonic and then there was a flashback episode where they slept with each other. Then I was like, ‘Oh, so that’s where we are right now. OK, they definitely did have an attraction.’ Then it got to the point where he needed her from a work standpoint and she was his right hand, and he could not live without her to navigate the world of law how he saw fit,” he recalled. “He understood that if they did get together, then that would be the end of his career. He was so career-motivated for so long that he put it out of his mind. She’d start dating people here and there, and I think he would question himself along the way.”

“But at a certain point, and as the years went further, I think he realized that there’s something more than just your work life, your career,” Macht continued. “Everyone’s going home to their loved ones and maybe I’m not seeing what’s right in front of my stupid face. So that’s why, I think, it clicked for him and it clicked for her. And they were both at the right place at the right time, and that’s why they’ve finally connected.”

Though the Darvey romance is rather young in its existence, Rafferty promised fans that their ending will be satisfying. But will it include wedding bells, a la Rachel and Mike’s fairy tale nuptials?

“I don’t think their ending is a big white wedding. I don’t think that’s Donna’s dream,” the actress said. “The moment that they got together at the end of season eight, when she saw [Harvey’s] face at that door, she saw a different guy — a guy who had evolved into one who was ready emotionally [and they could] never go back from here. They could only move forward. He moved through the doorway and into their life, so they’re going to move forward as partners.”

“I do not think Donna’s end is getting the guy. That’s not the story that I think we’re telling,” Rafferty emphasized. “They’ve walked side by side all along in one way or another. At the end of it, it will perhaps be that they walk side by side into their future lives, which may have different career paths. But she is ambitious and will march forward into her career and lean into it. That’s who she is. I don’t think she’s going to be done now that she got the guy.”

But with Harvey and Donna becoming an item, there is the lingering question about the status of Donna and Thomas Kessler’s (Sasha Roiz) relationship. Don’t worry, you’ll see Roiz in the first episodes back.

“There’s a hanging chad there,” Rafferty teased, revealing that there was indeed a breakup scene between the two that was cut from the season eight finale. “Now, we have to deal with that. There has to be a conversation.” 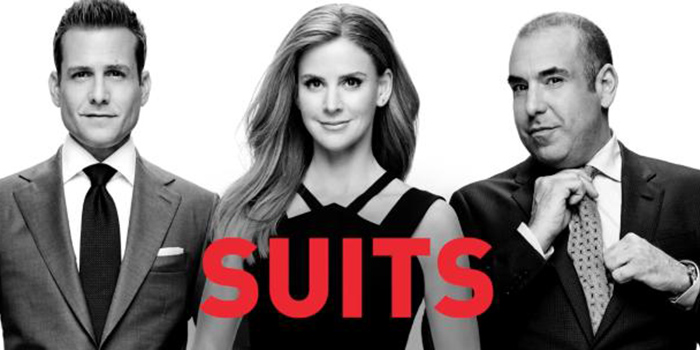 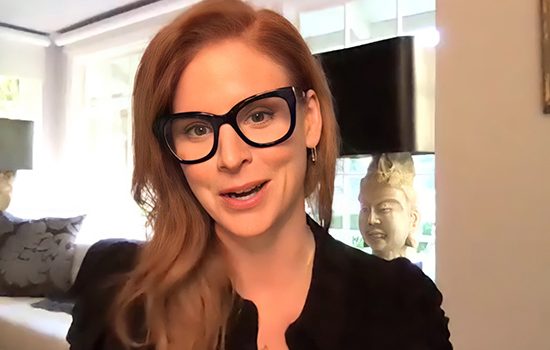